On-Track to Graduation and College Readiness

Like all Network for College Success programs, our On-Track to Graduation work is based on what we learned from cutting-edge research—and ideas we had for how data and school systems can be harnessed to improve student attainment.

According to a series of groundbreaking studies from the UChicago Consortium on School Research (the UChicago Consortium), student success in the first year of high school is a critical indicator for graduation. The concept of being On-Track to Graduation–captured in an easy-to-use indicator called the 9th grade On-Track rate–entails freshmen students earning at least five credits and no more than one F in semester grades for core courses. The UChicago Consortium found that when freshmen suffer from high absence rates and course failure, many never recover. In fact, these students are much more likely to drop out even if they entered high school with high grades and test scores. On the other hand, students who are On-Track at the end of freshmen year are four times more likely to graduate from high school.

Using the UChicago Consortium research, NCS Coaches work with our partner schools to ensure students stay On-Track. We help schools develop an On-Track team of teachers, administrators, and counselors that meets regularly to assess student grades, attendance, and behavior. The team then determines interventions for groups of students at risk of falling off track. Team members compare notes on how students are doing in class, talk with students about challenges they are facing inside and outside of the school building, and connect students with academic or counseling supports designed to help them get back On-Track. NCS Coaches also provide on-site consultations and facilitate cross-school meetings so team members can problem solve, work together, and share successful interventions within and across schools.

In 2009, the UChicago Consortium research on On-Track prompted the Chicago Public Schools to create Freshmen Success reports for all high schools in the District. These reports provided school administrators with real-time data on freshmen grades. NCS helps the On-Track teams get the most from these reports supporting teams to refine interventions to better meet the needs of struggling students; evaluate students’ progress throughout the school year; and strengthen the team’s capacity to lead this work. Partnered with NCS, schools are making systemic changes to significantly improve the number of students graduating from high school by intervening early, before students fall too far behind.

Success for All Grades

In 2011, encouraged by the positive momentum of the On-Track work with freshmen, NCS expanded the program to help schools create On-Track teams that focus on student success in the upper grades as well.

Each school’s On-Track team regularly uses data to ensure students are in school, in class, and reaching their potential. Like with freshmen, the teams use data to identify sophomore, junior, and senior students in a timely way who need help and then work together to figure out the best options. NCS supports this work by continually focusing schools on important nuts-and-bolts factors, such as developing clear team responsibilities and measuring the effectiveness of interventions. NCS helps school leaders create the climate, culture, and structures that allow the On-Track Teams to be most effective.

Research by the UChicago Consortium has consistently shown that students with a minimum 3.0 GPA in high school are far more likely to succeed in and graduate from college. Yet, currently less than one-third of CPS graduates meet that mark. The next step in NCS’s On-Track work is aimed at addressing that disparity.

During the 2013-14 academic year, NCS began offering Performance Management sessions to support school leaders to think beyond On-Track and work towards improving grades. In partnership with UChicago Consortium, NCS analyzed and presented student data from the schools, such as On-Track rates by subsets (gender, attendance, etc.) as well as the proportion of those students earning a 3.0 GPA or better. Discussion and planning at the sessions helped schools use their own data and input and ideas from peers to create actionable plans to not only improve On-Track rates, but raise student performance and ultimately improve the readiness level of students for college.

This successful addition to the program has quickly expanded due to demand and interest from the schools. NCS now facilitates four sessions a year and we have added incoming student performance and attendance to the data sets. We are already seeing grades improve in several NCS schools, in addition to substantive conversations about increasing the level of academic rigor for all students.

A Capacity-Building Model for School Improvement

Download this paper to explore the NCS approach to improving the quality of high school instruction to increase student learning in collaboration with educators. 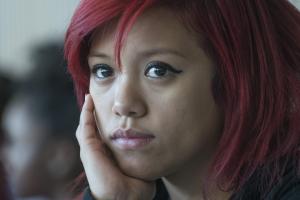